S.T.A.G.E. Student Theater And Godly Evangelization,
is a Christian student theater spreading the Word of God through the
​performance of plays.

S.T.A.G.E. student theater, based in Lincoln, Nebraska, teaches the faith through drama.  Sessions are set up for different age  levels and are designed to fit within the school year schedule, or a shorter summer camp format. Students work toward a finished play at the end of each session that is presented to a live audience.  Ranging from serious drama to the humorous and sometimes musical, the plays are unique in style, wit, and poignancy. Classes are geared for students eight years and up, and are separated into levels.

Tuition is based on level and length of session (see participant page).  Our Tuition Package includes training with professional teachers in theater, dance, and music;  production fees; costuming; and a professionally taped DVD of the show.

S.T.A.G.E. operates with a team of adult crew members who oversee backstage management, technical work, and cast needs. Parents or older siblings are asked to volunteer with performances in areas such as ticket sales and concessions to help the shows run smoothly.

S.T.A.G.E. embodies strong family values, along with a friendly atmosphere that creates lasting friendships.  Older kids look out for the younger ones while still having fun and learning about their faith and the medium of theater.  Many of our students come back year after year, graduating into more challenging roles.  Students are expected to adhere to the S.T.A.G.E. Commandments (see participant page) which address good Christian behavior and stewardship.  S.T.A.G.E. is a Catholic-based program but is ecumenical in its enrollment policies.

Service hours, as well as the John Paul II Award of Theater Excellence, are available for high school students. 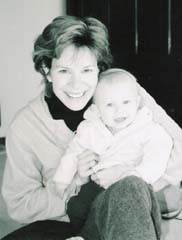 Lee Ann Hotovy writes and directs Christian student plays to evangelize, educate, and entertain.  To date, she has written and successfully produced dozens of plays that contain unique elements of creativity, while reaching out to its' audience with a Godly message of hope and love.  These original scripts offer a variety of genres, from comedic to dramatic, with moral and Christian truths throughout. Lee has been the creator and director of S.T.A.G.E. since its beginnings in 1999.  S.T.A.G.E. came in response to Pope John Paul II’s call to artists, to spread the Word of God through the arts.

As a mother, grandmother, artist, and writer, she has a great sense of integrating the faith into these productions and loves working with kids of all ages.  She has a Bachelor of Fine Arts degree from the University of Nebraska-Lincoln, and received the Nebraska Young Artist of the Year Award in 1991.  She  has also performed in theater and dance, including high school, college, and the occasional adult role.

Anna Hanselmann is a lyricist and musical writer for S.T.A.G.E. She graduated in 1985 from the University of Nebraska -Lincoln with a Bachelor of Music in Vocal Performance.  While attending UNL, Anna enjoyed a  four-year membership in the Scarlet and Cream Singers.
From 1995-1997 she was  the director of Ogallala's long-running Front Street Review.  Anna  Hanselmann is married with two daughters, and three grandchildren. She is a private voice and piano  teacher, and enjoys working with students to discover their  musical potential. 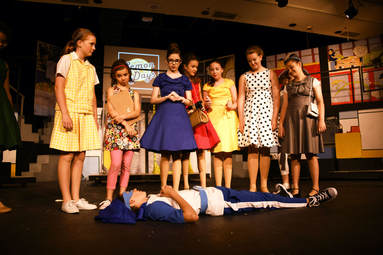 S.T.A.G.E.  began in 1999, in response to Pope John Paul II’s call for artists to evangelize with the arts. Starting with a very small cast, and a very limited budget, S.T.A.G.E. performed its first play in the basement of St. Teresa’s church.  It has grown over the years, performing several plays each season in local theaters, churches, high schools, and even Benedictine College (The Outlaws of Ravenhurst,  2006) with casts ranging from 15-50 members per show.  Our trademark Fatima play has been performed for over 20 years in conjunction with the annual Marian Mass and Rosary, which draws crowds of over a thousand people. More recently (2015), S.T.A.G.E. created and performed an original musical about Father Flanagan and Boystown in an effort to inform the public of his amazing work with boys and his potential canonization.  This work will travel to Ireland and be performed in 2017.​

Our plays always carry a faith-filled message of hope and love, while offering humor, entertainment, and creativity.

Parent volunteers have  allowed S.T.A.G.E. to grow, by lending their talents in the areas of backstage management, videography and photography, costumes, lights, sound, and marketing.

Plays are reviewed in content by a diocesan priest, and spiritual guidance is offered when needed.

WHAT OTHERS ARE SAYING ABOUT S.T.A.G.E.:

“Our children have all benefited greatly because of STAGE.  Especially our son, Nick as he headed off to high school and became totally involved in Pius Players.   With the guidance of Lee and STAGE, Nick gained the confidence and stage presence he needed to continue acting at the next level.” Kim and Dale Theisen


"We have had two of our children involved in STAGE over the years and it has been a wonderful experience. It has provided so many blessings! Our children have learned much about acting & singing, gained a great deal of confidence and formed many wonderful friendships!   Our older daughter, Bridget, has gone on to be involved in her high school's plays and musicals and we attribute this greatly to opportunities she had in STAGE."  Greg and Patty Lang


"S.T.A.G.E. IS SO MUCH MORE THAN JUST THEATER!  The benefits are immeasurable!  S.T.A.G.E. has been the single most influential children’s activity in our family's life on many levels.  Not only has it provided our children the opportunity to be a part of fantastic plays, it has given them a comprehensive experience in all aspects of performing arts; whether it is learning a complicated dance number, singing an original song, being fitted for a costume, working the backstage or blocking out scenes.  For our family, the S.T.A.G.E experience has allowed our children to make friendships, develop self confidence, as well as, foster a lasting love for the performing arts.  As a parent, I also receive the benefit of watching my children perform in a Catholic, professional, well run and incredibly fun organization.  My oldest daughter wants to pursue performing arts in college.  This honestly came about because of her involvement in S.T.A.G.E."
Doug and Mary Koenig